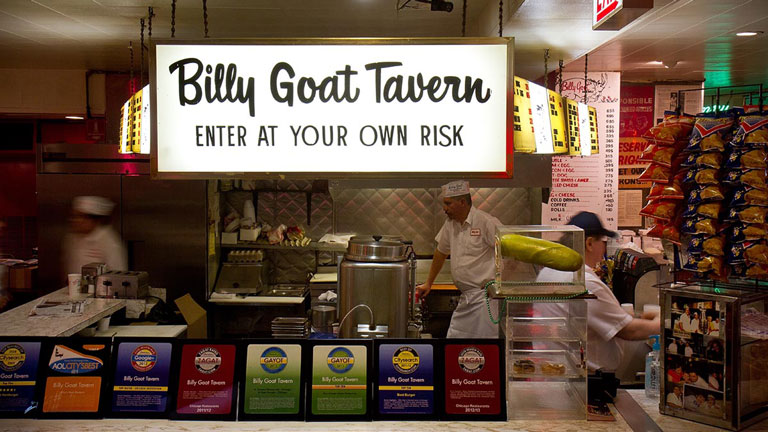 Chicago, Illinois  (June 9, 2016) -Steeped in over 80 years of rich tradition, The Billy Goat has appointed JRL Group as its exclusive licensing agency to develop and manage a comprehensive licensing program.

The iconic Billy Goat is known throughout the world. – not just for its famous “CHEEZBORGER, CHEEZBORGER, CHEEZBORGER!™ and NO FRIES, CHEEPS!™ (thanks to the legendary Saturday Night Live skit featuring John Belushi, Bill Murray and  Dan Aykroyd), but also for the origin of the curse of the Billy Goat on the Chicago Cubs.  Home of the Chicago Burger, The Billy Goat Tavern has been serving U.S. Presidents and other politicians, celebrities, journalists, and locals since its doors opened in the mid 1930’s.

Identified as a treasure of the city, The Billy Goat is a highlighted stop on several walking and bus tours of Chicago. The legendary hot spot has won numerous awards, including:  Best Chicago Tavern, Best Local Tradition and Best Burger. The Billy Goat has nine locations in the Chicagoland area and Washington, DC, and there are plans for expansion to other cities.

“We are thrilled to be working with a Chicago legend to extend the brand into new channels and markets,” said Andrew Lieb, President of JRL Group, Inc.  “There are some who can’t get to The Billy Goat as often as they’d like, and we look forward to bringing the unique experience to consumers through a variety of retail channels,” he added.

Home of the Original Chicago Burger, The World Famous Billy Goat Tavern has been serving up its “Cheezborgers!” to Chicagoans and visiting patrons since 1934.  A Chicago institution for 80 years, the Tavern has been spotlighted in numerous newspaper columns from the legendary writings of the late Mike Royko, highlighting its colorful history and the people who have frequented the Tavern over these many years.  From the famous Billy Goat Curse to the inspiration behind the SNL “Cheezborger!” skit, the Billy Goat Tavern has become a Chicago Landmark and a World Famous destination for people worldwide to visit.  For more information visit, www.billygoattavern.com

This entry was posted on Jun 9, 2016inApparel, Clients, Food, Licensing