A Full Throttle Partnership Between Cobra Electronics and Harley-Davidson®

“Cobra has been a leading designer and marketer of Citizens Band (CB) radios for decades and partnering with an iconic brand such as Harley-Davidson will deliver a unique opportunity for very loyal customers,” stated Andrew Lieb, President of JRL Group. 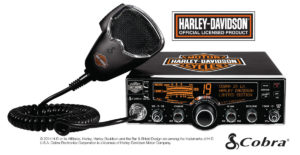 This entry was posted on Dec 16, 2014inAutomotive, Clients, Electronics, Licensing